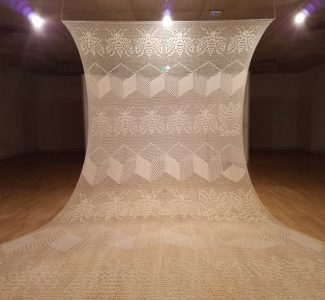 Art with a focus on Fibers

“Art is all around us all the time.”

For Jennifer Bennett, a recent MU graduate with an MFA in Art with a focus on Fibers, this statement could not be more actuate. As a Missouri-based artist, she draws her influence from the rural landscape around her. Born and raised in Mid-Missouri, Bennett was deeply influenced by the culture and landscape she experienced growing up. Over the years, her life and art have become one, leading her down an incredible path of creativity pulled directly from her past and the very soil from which she grew. Art is all around us, because art is in everything. Anything can be an inspiration to create.

It was pretty quiet growing up in Ashland. Bennett spent a lot of her time with family, and many days going to antique shops with her grandmother. Her family lived off a gravel road with just a few neighbors, surrounded by pastures, cropland, and the agricultural industry of the Mid-Missouri region. Farming and agriculture were a part of her daily life.

Living here, Bennett was able to see the effects of the Mid-Western farming crisis of the 1980s.

“There was this shift going on from small, family-owned farming to larger, agribusiness and corporation farming,” added Bennett when discussing the influence that agribusiness has had on her art. “That peaked my interest.”

Well, one of her interests, that is.

It is hard to pinpoint a single impetus, because many aspects of her life have influenced her artistry. “My mom was an avid crocheter when I was growing up. My aunt was a quilter. My grandmother collected fabrics and taught me to quilt. Everyone knew how to sew and had sewing projects going on,” she says, “I was exposed to fibers media at an early age. I wasn’t pushed into that area, but I was exposed to it. I enjoyed watching my family do those projects, and they would show me how to operate the sewing machine or make appropriate quilt stiches at the Senior Center.”

Years later, these experiences continue to shape her focus as an artist.

It was not a straight march to graduate school for this artist. After concluding an undergraduate degree, Bennett took some time away from academics to experience the world around her. “I’m more of a multi-interest person, and not a strict planner,” she said. “After undergrad I just took opportunities as they came.” Bennett worked in various jobs and went where the wind took her.

But her artistic inspirations followed her everywhere, and she soon decided that she had something else she wanted to accomplish with her art. Though she imagined that she would continue drawing, she rekindled a love for working with fiber while taking one of her first MFA courses.

“Drawing is still an interest, but I thought if I am here in graduate school, I want to expand my knowledge,” Bennett explained. “Fibers was a great choice considering what I wanted to talk about, and my history living in rural Missouri.”

Bennett may have begun by working with paper, but she was quickly enthralled by the legacy of the handicrafts that had surrounded her childhood. She drew on the work of her mother and grandmother to make art through the techniques used in quilting, weaving, and crochet. This turn eventually became the groundwork for her thesis project Becoming Aware, a large crochet piece that weaves together the handicraft of crochet with a conversation about agricultural change and its effect on native pollinators. Honey Bees are now relied upon heavily to pollinate expansive monocultures that have wiped out native habitat and pollinators.

“Becoming Aware is a project that intertwines honey bees, cotton, and crochet handicraft as a way to critique both the industrialization of agriculture and manufactured goods. Early agricultural enterprises and craft-based manufacturing was small-scale and revolved around civic activities. These businesses are now monopolized by large corporations that are socially, economically, and environmentally destructive.”

Hanging 8ft off the ground and sweeping out across the George Caleb Bingham Gallery floor, Becoming Aware’s large dimension seems absurd for a piece of crochet. The 16ft wide cloth is much larger than traditional crochet products: smaller pieces like accessories and clothing with blankets being on the upper end of the scale.

“I chose cotton, because it’s a traditional crochet material: cotton threads. And I chose crochet, because it has not been mechanized yet. So, I am juxtaposing this industrialized cotton thread, or the idea of this monoculture, with the handicraft of crochet and capitalizing on the ridiculousness of creating such a large piece of crochet.”

The piece’s size, however, is a part of its message. Bennett chose this method, because crochet is very malleable. It distorts under the weight, or “the weight of the issue,” as she put it.

She completed the piece by using “filet crochet,” which is a lace-making technique. It’s a rather simple method of two stitches to make a pattern of squares.

“The simplistic pattern of row after row echoes how farming has been standardized, and focuses on profitability, numbers, and limited variety.”

Bennett built the design off of a grid pattern, but when it hangs, the piece stretches into a more hexagonal shape similar to how our relationship to food has been distorted by big business models.

Bennett’s crochet work is made from a highly manufactured cotton yarn as a comment to the industrialization of this monoculture crop. Bennett used this material, because the growing of conventional cotton is harmful to local ecosystems.

“Conventionally grown cotton is heavily treated with agrochemicals, and it’s really harmful to native pollinators, because natural habitat gets whipped out.”

Honey bees, butterflies, birds, and other local pollinators are disrupted because of the shear impact of large monocrops.

“The natural habitat is not there to support those pollinators. Essentially, it’s a feast or famine situation. There is only food at a certain time of the year. The rest of the time it’s like a crop desert. There is nothing for the pollinators. It’s this cyclical thing that happens. Honey bees allow us to have monocultures, but monocultures are actually killing the very thing that allows it to exist.”

Bennett embedded images of bees and hives into the piece. Crochet as a method allows the artists to put images directly into the cloth while working through each row of loops and knots.

The imagery within the cloth expands and grows larger from top to bottom. Bennett did this by using larger crochet hooks as she worked.

“As the cloth grows larger, that represents the shift from small farms to large agribusiness. And within the fabric, you can see that the tension is becoming looser and looser.”

The bee and hive images turn, flip upside-down, and become negatives of themselves as the work goes on to represent the loss of the environment and the issues that arise from these agricultural practices. “[The bees and hives] are becoming negative images of the positive to represent the loss, or the surrender, of that bee as they are exposed to toxic chemicals.”

If the piece were to continue, all of the images would be in disarray. Bennett’s work asks the questions to the viewer. “Are we going to continue on with this unsustainable practice? Or, are we going to rethink what we are doing?”

A ball of cotton thread sits connected to the end to show that more pollinators will be affected if action is not taken. “[Crochet] is theoretically done with an endless thread. It could all unravel with one single [pull].”

“It’s a quiet scream,” Bennett said. She considers the work an activist piece, but it is approachable. The more one looks at the piece, the more there is to see. “It is approachable. It is easy to relate the fabric to ourselves and our bodies. Cotton is so prevalent in so many things.”

This piece was the only item in her thesis gallery showing to heighten the impact and message behind it. “Since I’m talking about monoculture, I needed to have that singular statement, that singular piece, to talk about the issue. I didn’t want the distraction of more pieces in the show.”

Bennett hopes to show Becoming Aware at more venues, because her piece highlights an issue that she wants to keep talking about.

“We need a healthy environment in order to have a healthy future.”