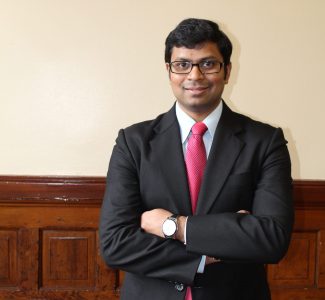 Sagar Gupta, a recent MBA graduate from the Trulaske College of Business, left his home in India to pursue an education here at Mizzou. He had already earned a bachelors in biotechnology, but he was not ready to stop learning and was attracted to the level of research that was being done at the universities in the United States.

It was the research at MU that impressed him the most. With a graduate assistantship and the drive to make a contribution to the world around him, Gupta began his PhD program in biological engineering in 2007. Though he did not know it at the time, his tenure at Mizzou would result in so much more, including a Ph.D., post-doctoral appointment, and a Masters in Business Administration.

During his years as a Ph.D. student, he worked to create a system that used sensors to detect cancer cells in the body. Essentially, when cancer is suspected in the body, it can take some time to get clear results as to the diagnosis. This would include biopsies or invasive procedures to remove a portion of the tissue to test for cancer. Similarly, when a patient is in the treatment phase, they sometimes have to wait months to learn if treatments are working or if cancer has spread. Gupta’s Ph.D. research aimed to change that.

“The technology we developed was to just take a small vile of blood [to detect cancer cells],” he explained. “We would shoot it with a high energy laser, and this laser would make the cells produce sound. Depending on the sound it produced, we could differentiate whether the sound produced is from a red blood cell, a white blood cell, or a cancer cell.”

The quick turn around with this method allows the doctors to “quickly see the progression, whether cancer cells are increasing or decreasing. This makes it very easy. And also, it doesn’t cost as much as MRI or CT scans.”

This research had great potential for commercialization, and Gupta was advised by his professor to take classes from the College of Business. It was truly the start of something new and exciting. He was given the opportunity to help a local startup create a business plan that combined people from different fields including engineering, researchers, and lawyers.

“This was the stepping stone or the turning point, that got me interested in the MBA, the business aspects,” he said. “Soon I realized, it’s not just doing research. It is also taking the research that we develop to the common man. That is what is more important, and the MBA gave me a platform to do that.”

Gupta was catapulted into the world of business, where he has flourished. But his journey at MU did not stop there.

After completing the Ph.D. in 2013, he started working as a post-doctoral scientist with the School of Medicine where he now works with nanotechnology. Gupta does not shy away from hard work as he officially began his MBA program and his post-doc position at the same time.

This process could potentially lead to price drops in fuel. Though this method is still in the research phase, the team has been able to increase savings by over 20 percent so far. It is a platform technology that can be used for other things, including pharmaceuticals.

“We can use it for any purpose which requires enzymes. And any process no matter what it is can go in for cost reduction using this particular technology.”

He flourished in business, and he credits his professors at Mizzou for their encouragement. Though he started off on a research career, one class in the business school lead to a new degree program and a new path.

“My graduate mentor [Dr. Kattesh Katti] who is my post-doc advisor, he not only concentrates on research. He encourages us to do something more. Something you are interested in,” said Gupta. This mentoring from Dr. Katti and other professors helped Gupta find the path that best worked with his interests.

Gupta found great help from the MBA program, which allowed him to plan his schedule around his work at the University.

“Working full time and studying full time is very difficult, but it is the MBA program which actually helped me get through this.”

He credits the professors and staff in the business school for a lot of his success because the program gave him real-life training opportunities.

“In the finance course, we were asked to see if we could get a merger and acquisition done between a startup and a larger company,” he said. “Now, I work at a startup so why not use the same finances. So I took the finances of the startup where I work and wanted to see if it fits in with a different company.”

The partnerships between students and companies are a win-win situation.

“We get the advantage from learning in both the academic setting and the real-life setting. It’s a wonderful deal!”

Gupta worked with a company called Elemental Enzymes, an environmental startup. Gupta and his team of fellow MBA students designed a business plan for the company and pitched it to investors.

“Our business plan was selected as the top forty-six in the world. We were invited to Rice Business Plan Competition at Rice University. It is the world’s richest business plan competition.”

Opportunities like this introduced him to other professionals and students. He realized that research is important, but the business side is a huge enterprise.

“We also got selected to the Walmart regional business Plan Competition, and we won it. We went to the nationals.” His team was awarded fourth place, an impressive feat.

Gupta worked for the start-up company, founded by MU professors, to enhance the affordability of biofuels through the enzyme retrieval process studied in his post-doc position.

His MBA training also allows him to work with potential investors.

“The MBA gives us that kind of leverage to not only utilize our skills, what we have in the background, but also further enhance it by applying statistics and finance and marketing.”

This way, he is able to contribute to business plans without hiring someone else to do it. The combination of his Ph.D. and MBA is “bridging the gap between science, technology, and business.” They needed someone who could understand more than one aspect of the company’s goal.

“This startup also gave a problem for the executive MBA case competition, and this is how I linked my research and helped my work with the MBA. The MBA gave me the confidence and work gave me the opportunities.”

As a result of his success at Mizzou, Gupta was recognized by Poets and Quants as one of the Best and Brightest MBAs in the Class of 2016. The students recognized come from schools all over the country, including the top business colleges. This is the first time that Mizzou has gotten this recognition. He credits the resources at the University and the people he has worked with for his successes.

“It’s all what Mizzou made me. I am Mizzou Made because that’s where the opportunity was given to me.”

His advisor Dr. Katti has had a huge impact on him.

“It was his encouragement that allowed me to take on a full-time MBA with a full-time job,” he said. “That’s a very unique thing.” He believes that his advisor’s encouragement had everything to do with his success. “Every time I would talk to him, he encouraged me not only with research but the job search, business, anything! You name it, he’s there for me. And my graduate advisor, Dr. John Vaitor, he always said think further, doing something. You shouldn’t be just another Ph.D. student.”

In his, rather limited, free time, Gupta likes to run and recently ran his half marathon. It helps him stay motivated.

“It’s like setting a goal and achieving it each day, and that gives me confidence. It’s the same in my research and everything I do.”

He also enjoys going out to eat and to the movies, especially in Kansas City. His wife works at the University of Kansas Incubation Center as a research assistant professor. They get to see each other once every few weeks, but regularly talk on the phone, a point of personal enjoyment and intellectual stimulation for Gupta.

“When two PhDs speak, we always end up talking about research. It’s kind of nice to exchange ideas.” And every time an MBA case competition comes up, he wants to be involved. “I like the competitive spirit.”

Gupta recently joined as an administrative fellow at the University of Missouri Hospital. Through his diverse training at MU, he can now apply the clinical concepts he learned and developed as a scientist and the managerial knowledge through his MBA to improve the quality of life of the people in the Mid-Missouri region.

“I’m interested in finance,” said Gupta. “My ultimate goal would be to work for a mergers and acquisitions firm because if a big company wants to purchase a small company, I can look through the science and what they are doing, but also the financial aspects of it.”

Gupta’s experience at Mizzou has forever changed him and shaped him into the person he is today.

“I wish that more people would get to know that Mizzou is a truly amazing University. They just have to come here to see it.”