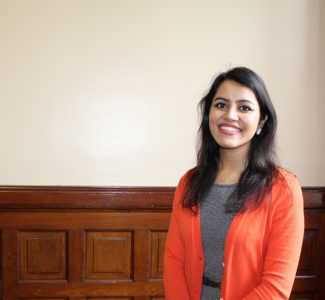 Sanchita Gargya is a doctoral student in Psychology at the University of Missouri.

Sanchita Gargya, a PhD student in Psychology, first came to the University of Missouri in the fall of 2012. It was her first international trip and the first time she ever visited the US. She knew this would be a big change for her, but she was driven to make her mark on the field of psychology.

Growing up in New Delhi, India, Gargya was very close with her grandparents.

“The reason I got into aging specifically is because for two years of my life I was brought up by my grandparents. They inspired me to do aging research.”

She started working on this interest during her time as an undergraduate and through her master’s program at the University of Delhi, India where she studied psychology. But, she felt she was not quite finished with her studies and decided to pursue a doctoral degree.

“When I was looking up places that I probably wanted to do my Ph.D., Mizzou’s Cognition and Neuroscience program caught my attention as it had a really good lab studying cognitive aging, which is exactly what I wanted to do.”

While searching for graduate programs, Gargya had read about Dr. Moshe Naveh-Benjamin’s lab here at Mizzou, and felt that this lab would be a great place to continue her research. The lab had a high number of publications and interesting experiments that were already in process.  It felt like the perfect fit. So, Gargya crossed fingers, and sent in an application. Then, the good news. She was given a position to work in Dr. Naveh-Benjamin’s lab and was accepted as a graduate student in psychology. The next step in her research journey was about to begin.

“What we are trying to study in this lab, in general, are the effects of aging on episodic memory (long-term memory for episodes), which is basically memory for all of the different episodes that you have in your life and how you learn, store, and retrieve these details embedded in an episode.”

An episode is any experience one has, the time, place, who you are with, your emotion, how you’re feeling, and/or other details associated with the experience. (For example, what you ate for dinner last night, where, and with who would be an episode. When a memory is retrieved, “you activate an episode.”

Now, Gargya studies age-related changes in memory processes and how these episodes are stored, and accessed differently as we grow older.

“I study how memory changes with age,” she said. “Specifically I study how you are able to remember things, store them, and retrieve them.”

Gargya is studying the effect of emotion on episodic memory for younger and older adults. For her master’s thesis, Gargya compared the memory processes of older adults from the community (ages 65 to 84) and younger, college-age adults (ages 17-23).

“I wanted to assess the benefits of emotion, if having an emotional component to the episode helps old adults with their memory.”

In particular, she wanted to assess whether memory for the connection between a face and a name—a task encountered by people every day, and one which seems difficult for older adults—can be helped by the face having an emotional expression: for example, happy or sad, compared to a neutral face.

She is also interested in teasing apart mechanisms associated with different types of emotions and how they influence our memory performance differentially. Crucially, addressing how this is different for young vs. old people.

By understanding the way emotion hurts or assists memory, Gargya and other researchers can come up with tactics and strategies to help improve memory retrieval for all age groups. She has been presenting this research and is anxious to share her findings with her field and with the public.

As she moves forward in her program of study, Gargya’s dissertation research will continue to examine the ties between emotion and memory.

“I’m trying to figure out if there is an implicit association that you make between two salient spatially proximal stimuli. So, if you’re presenting an emotional face, with a name, would the emotional aspect of one component spill over to a neutral component such that your memory performance for the neutral component, the name, somehow benefits/suffers from the fact that it was shown with an emotional face. I want to see how that translates into aging. How does that show up when we do this test with older adults and what the underlying mechanisms are?”

After graduation, Gargya wants to continue doing research as a post-doctoral fellow branching out to study episodic memory changes in clinical impaired older adults, and ultimately work as a cognitive neuroscientist, in academia or the industry. She wants to continue to focus on age-related neuropsychological changes in episodic memory, focusing on interplay between emotion, attention and other cognitive variables with the aim of being better able to understand and aid older adults’ changing episodic memory abilities.

“My ideal job would be to work as a memory training specialist or a neuroscientist who is able to conduct research and provide people who are suffering from Alzheimer’s and dementia with tools to slow down their memory decline,” she said.

After having worked with healthy community dwelling older adults, Gargya hopes to work with clinical aging populations, particularly with individuals with neurological issues. She wants to see how these patients react to emotional stimuli to further the research on the connections between memory and emotion.