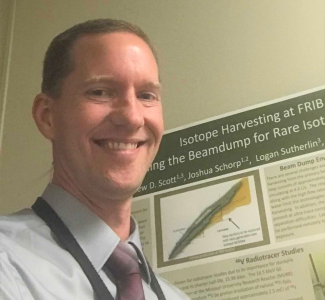 As the saying goes, “it’s never too late to learn” and Matthew Scott is the perfect example of this sentiment. As a non-traditional doctoral candidate, husband, and father of three, Scott has successfully managed to conduct research on harvesting rare isotopes while working as the Sr. Nuclear Manufacturing Specialist at the MU Research Reactor (MURR). At the encouragement of his advisor, Dr. J. David Robertson, Scott decided to go back to school fifteen years after being out of the classroom. Although he was unsure of how he would handle working full-time, having a family, and working on a doctorate, he decided to give it a try after Dr. Robertson encouraged him to consider a PhD in Radiochemistry. “He told me that he had a project recycling isotopes from an accelerator facility that he thought I’d be good at. He was right,” says Scott. 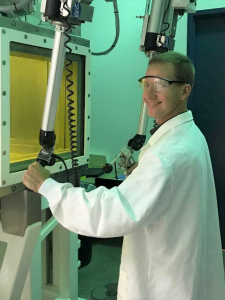 Matthew Scott is shown above in a “hot cell” where radiochemicals are produced on a routine basis at the MURR.

Most recently Scott has been awarded with the Staff Development Award and given the opportunity to attend the 8th International Workshop Characterization of Porous Materials. “I learned of new instruments and techniques for predicting the behavior of porous materials in the capture of radioactive gasses” says Scott. But the one opportunity that has been most significant to Scott during his time at MU has been working with the team that brought about the FDA approval of Lu-177 for use in Lutathera® to treat gastrointestinal and pancreatic tumors.

Today Scott is not only on track to defend his dissertation this fall but he is also on target to reach a more personal goal, “My daughter is a biochemistry major. I’m trying to graduate before her,” shares Scott. And by the looks of it he is positioned to do just that while continuing his research on isotope production and separation at MURR.

As Scott prepares to graduate twenty years after obtaining his bachelor’s degree, his journey reminds us all that it is never too late to get started on a new path to success. His advice, “ Don’t give up on your dreams. Sometimes they are just postponed,” and we couldn’t agree more.