Nominees for these awards must currently be a postdoctoral fellow at the University of Missouri, Columbia campus and have held the position as a postdoc for at least one semester prior to the nomination. Self-nominations are encouraged.

Nomination requirements for both postdoctoral awards, including eligibility and criteria, can be found in the attached call. The fillable nomination form is also attached below.

Send nominations and materials as a single PDF to: postdoc@missouri.edu

Deadline: Nominations are due by 5 PM (Central Time) on February 15th each year. If the 15th of February falls on a weekend, then the due date is the following Monday.

This award represents an appreciation for an individual who has demonstrated either a profound, sustained, or leadership contribution to improving the postdoctoral experience.

The award recognizes an individual who has contributed to improving the postdoctoral experience through:

The MU Graduate School has paid for institutional membership with the National Postdoctoral Association (NPA).  This means all of Mizzou’s postdocs are entitled to free affiliate (individual-level) membership to NPA. In doing this, we join a long list of other prestigious universities who are also members of NPA. Here’s a list of their individual member benefits:

To obtain your free membership, click the image below! Once on their webpage, select “Affiliate Individual Member, Postdoc” as your membership type. Create a username and enter your first and last name. Next, you will be prompted to confirm your membership type. Lastly, complete the demographic information, and enter the University of Missouri as your organization. It is as simple as that! 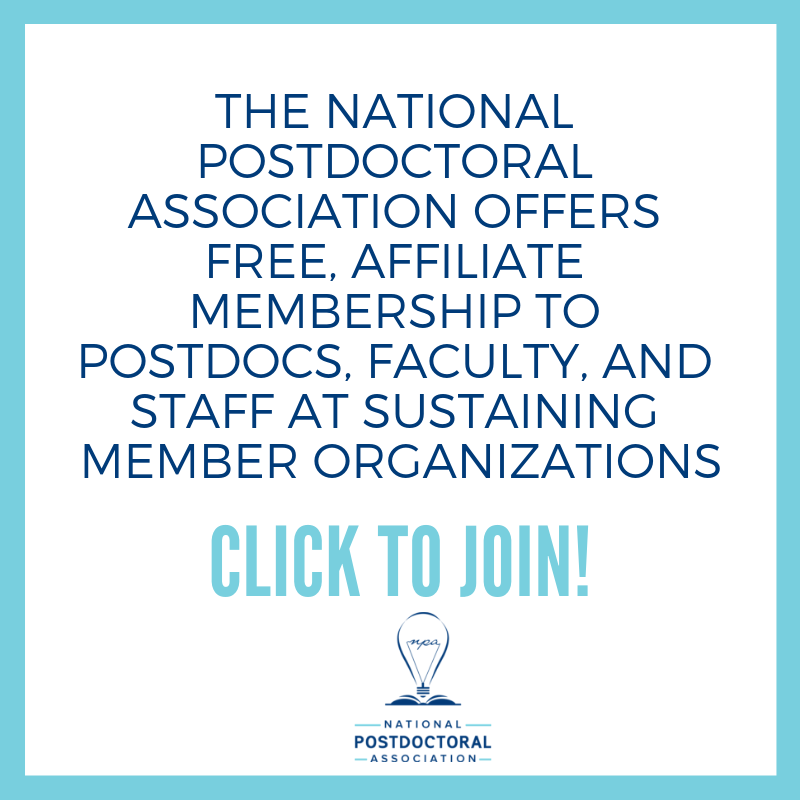