Faculty Member Building a Lab Where Everyone is Welcomed. 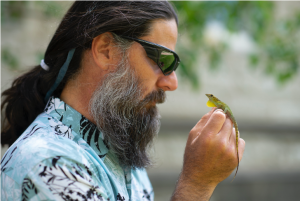 As a kid, he would play with lizards in his backyard, so it was an easy transition to study them in graduate school. Manuel Leal, Ph.D., grew up in Puerto Rico and was always interested in understanding how the Anolis lizards communicate. Along with their natural history, including their evolutionary history, behavioral, and physiological responses to new environments and cognition.

He earned his doctoral degree from Washington University in St. Louis and joined MU’s biology department as an associate professor in 2014. He came to Mizzou because it was “very appealing” to join the biology department, which has a long tradition for research in animal communication and evolutionary biology.

Manuel, as he prefers to go by, was awarded the 2020 Outstanding Departmental Contribution Award from MU’s Graduate School. At Mizzou, he’s enjoyed interacting daily with many amazing students. “Seeing the quality of students that are way ahead of where I was at that stage of my academic career gives me hope that the future will be much brighter,” he said.

When asked, what does diversity, equity, and inclusion in graduate education mean to you, he explained he thinks of diversity a little differently than most. He doesn’t think of diversity as an independent category; in fact, he argues that “discussing diversity without equity and inclusions is window dressing. I don’t see diversity as disjointed from inclusion or equity; if you provide an equitable and inclusive environment, you will end up with diversity. Giving everyone the same voice, treating everyone equally – Everyone is welcome. There is no place for explicit and implicit racism; instead, everyone has the same voice at the table.”

His goal is to build a graduate program that follows his grandmother’s advice to guide his actions, “Mi casa es tu casa” (My home is your home). This motto permeates all his interactions and decisions – which leads to equity and inclusion. Manuel wants to foster a program in which “we moved beyond the check-box syndrome, to an action-based system in which equity and inclusion are measured by tangible actions.” As faculty, he has had the opportunity to ‘educate’ other faculty on the difficulties that underrepresented minority (URM) faculty, staff, and students deal with daily on campus by sharing his personal experiences. He hopes this will change their views and actions. He puts this into practice every time he gets complimented for his contribution to the “beautiful gardens” from visitors to the campus, which happens often. “This is a clear evidence of unconscious bias, because I have a heavy Hispanic accent when I speak,” he said. “So, I take that opportunity to say thanks and invite them to my lab or classroom.”

At every interaction with faculty at campus-level discussions, he brings equity to the forefront, for example, by pointing out the negative effect comments such as, “we should consider him/her because they are an underrepresented minority” has on everyone. It implies that the bar needs to be lowered for URM individuals. “In fact, data shows that URM’s are more likely to take risks and produce work that is more innovative and with a higher impact. But that is an uncomfortable recognition for many,” Manuel said.

“The fiber of a functional society is to help each other, regardless of the society to which they belong. Similarly, at its core, scientific innovation flourishes from the fusion of different perspectives, which are inherently linked to the composition of the academic community,” he said. “At the level of my laboratory, fostering a laboratory community in which inclusion and equity is our mission has given us the ability to explore questions from a wide range of angles, and using a wide range of approaches.”

When asked what advice he would give current graduate students and postdocs navigating academia, he responded that students should do what makes them feel they are making a contribution to society. They should also be prepared to experience many setbacks, “but please don’t give up.”